The Great Escape is the UK’s leading festival and convention for new music and takes place in venues across Brighton next weekend (8-10 May), attracting over 400 artists and several thousand industry delegates. Saturday afternoon (10 May) sees us de-camp to the Old Ship Hotel for the Joining the Dots-inspired series of panels we were invited to curate, as part of TGE‘s new Blueprint convention strand, which focuses exclusively on music, creativity and technology.

Join us, a few old friends and some new acquaintances for an afternoon of debate covering everything from what next for fan engagement and location-based tech, to how to innovate. Expect some future-gazing, provocations as well as useful insider insights. Oh, and you’ll also get to hear from two of the project teams we’re supporting via Joining the Dots.

TGE is sold out, but there are still a few tickets available here for Blueprint . And remember you can follow it all on twitter via #TGE14 and #Blueprint.

Read on to get the low down on our award winner presentations and three music and tech panels…and everything else we’re up to while there.

Joining hub director Julia Payne to talk about their projects will be two of our award winners: Paul Archer (Daredevil Project) and Joey Baxter of Eventbox. Paul will be filling us in on Challenge Off – a mobile social game played around gigs and festivals that they want to trial as a means of increasing fan and audience engagement with artists and promoters and driving up live income. Joey will be lifting the lid on their Eventbox location-based app that lets you “listen to listings” to discover artists that suit your tastes and are playing within a kilometre of where you are. Joining them to join the dots is Toby Bennett from the Cultural Institute at Kings, who’ll be working alongside our project teams to help them keep their ideas on track. (Session runs 2.50-3.20pm)

Panel 1: Technology-based innovation: what do you need to be a ‘disruptor’ and how do you get it?

Starting as we mean to go on, and getting to the nub of it, we look at what artists and technologists need to innovate. Time and money are often seen as the key essentials for ‘disruption’, but what else needs to be in the mix? Chewing the fat on this one for us: Kriss Baird (Music Ally), Mary Keane-Dawson (myHealthPal), Tim Malbon (Made by Many) and Sarah Thirtle (Creative United). the hub’s Matthew Linley will be keeping order… (Panel runs 2.10-2.50pm)

Panel 2: Location-based technology – where could it take us?

Location-based technology is by no means new, but 2014 seems set to be when it hits its ‘tipping point’. So – excuse the pun – where could it take those of us who create music or who work with people who do? Signposting us to the future (if we can really stretch the metaphor) are: Matt Adams (Blast Theory), Joey Baxter (Eventbox), Jamie Hughes (Songkick), Sam Mason (Steer) and musician Chris T-T. All under the watchful eye of The Guardian’s Jason Phipps, who’s in the chair chair, if you see what we mean. (Panel runs: 3.35-4.15pm)

Panel 3: Fan engagement – what more can we ask?

As panel Chair Richard Haswell said to us when we put this panel together, long gone are the days when fan engagement meant sending off for your Dennis the Menace badge when you joined his fan club. In the wake of the crowd-funding, crowd-sourcing and anything else with a crowd prefix, what more can we ask of fans? What more can they ask of us in return? Our crowd – sorry, panel – tackling these questions are: Paul Archer (Daredevil projects), Will Grant (Twotap Digital), Daniel Harris (Kendra), Juliana Meyer (SupaPass) and musician Jim Moray. (Panel runs: 4.20-5.00pm)

And as if that’s not enough, Julia’s also paneling it earlier in the day on Saturday, sitting in on a panel that’s happening as part of TGE: DIY strand. The topic under discussion? How can grass roots artists generate revenue at the very start of their careers, and what funding is available to help new talent seed the business side of what they do. Julia’s fellow panellists will be Rob Woodland (State 51) and Phil Nelson (First Column Management), with PRS for Music’s Andy Ellis in charge of the proceedings. Should put paid to too much skullduggery on Friday night…

And finally… some gems from our TGE playlist

It’s all about the music of course, and so to get us in the mood here at hub towers, this week’s listening has been all about acts playing at The Great Escape. Our favourites today (they change on an almost daily basis!)?

One of our highlights last year, Eliza and the Bear return this year as part of The Agency showcase on Saturday.

And our friends and colleagues at PRS for Music Foundation have a great line up for their Momentum Fund showcase on Friday, including Night Engine and  Hannah Peel.

Meanwhile, we’ll definitely be heading for Generator’s Bridie Jackson and the Arbour gig on Saturday, as she was a favorite at last year’s English Folk Expo, and we’re also liking the sound of Charlie Cunningham, who’s part of the BBC Introducing gig.

And finally, we’re finding it hard to pick a favorite from amongs Phoria, Douglas Dare, Paul Thomas Saunders and Luke Howard, who are all part of Arts Council England’s St Mary’s church line up on Thursday, which last year was another (!) highlight!

As ever, too much to do… But, that’s The Great Escape for you! 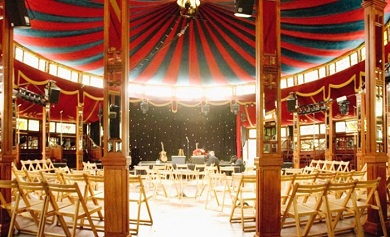