Four game changing projects have been chosen from more than 150 applications to the hub’s Joining the Dots project. A pioneering gig-swap network, opening up a digital music archive, a mobile game for gigs and a location based app for “listening to listings” will each received funding and expert support as they work to bring their nascent idea to fruition.

the hub’s director, Julia Payne, said Joining the Dots was developed to help people test new, disruptive ways of financing, presenting and building live audiences for independent live music. She said: “We are really excited about the four projects we’re supporting, which we hope will unlock new thinking and practice across the sector to benefit artists and promoters alike.”

The four companies, chosen by an industry panel, are:

* Eventbox who are trialling a new location-based app that lets you “listen to listings” to discover artists that suit your tastes who are playing within a kilometre of where you are
* Un-Convention are rolling out Off Axis, a new online resource that enables artists to play shows to full and appreciative audiences across the UK, by trading audiences and gigs with relevant artists from other towns.
* Daredevil Projects are testing the potential of Challenge Off – a mobile social game played around gigs and festivals – to increase fan and audience engagement with artists and promoters and drive up live income
* Cafe Oto, the Dalston, London-based space for experimental music, are trialling the viability of a digital membership service, that will make available exclusive downloads from their extensive archive of live recordings.

Find out more about Joining the Dots’ game changing winners from the hub on Vimeo.

All four projects will be discussed/presented as part of a Joining the Dots themed afternoon of panels at The Great Escape’s inaugural Blueprint Creativity in Tech day on Saturday May 10th in Brighton.

Jeff Thompson, co-founder of Manchester-based Un-Convention added: “We’re absolutely thrilled to be working with the hub. The ethos behind Joining the Dots: to develop ‘game changing’ ideas, share ideas and connect independent artists has great resonance with our work, and it’s great to be working with an organisation which understands the importance of thinking outside the box. We’re looking forward to working with Julia, her team, and the other teams to build new networks, share knowledge and make these ideas a reality.”

Among the project’s partners is the Cultural Institute at King’s College London. Deborah Bull, Director of Cultural Partnerships at King’s College, said: “In bringing together the best creative minds, the key players in the independent music sector and the rigour of academia, there is potential to develop new approaches that really change the face of the live music industry.”

Alan Davey, Chief Executive, Arts Council England, another of the project’s funders, said: “Joining the Dots is a great project that will help bring to fruition four ‘game changing’ ideas in live contemporary music. It will also help musicians and promoters more widely to develop their understanding around new touring, commissioning and financial models and provide networking opportunities, each of which is important to a creative, resilient and accessible music sector.”

In addition to funding of up to £10,000, each team also receives mentoring and other support to take their idea to market by May 2015. To ensure that artists and promoters from across independent music can benefit from their work, they’ll share progress and learning via a series of webinars, other online content and at an initial Joining the Dots conference on 12 September 2014. 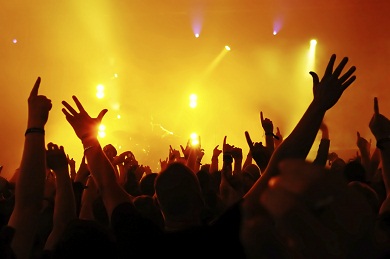